During lockdown a magnificent wooden tower has gradually emerged in the woods at Calgary Art in Nature, the brainchild of Matthew Reade but with input from local artists and other creative folk. In early July a small ceremony was held to officially open it by local children, with well-known wildlife film-maker Gordon Buchanan as guest of honour.
For us at R&A it started with a phone call from Matthew: ‘I’ve built a wee educational tower in the woods’ said he ‘well, it’s 5 metres high actually, and I’m not sure that it’s all that educational’. We accepted Matthew’s invitation with alacrity, and knowing Matthew’s tendency to underplay his considerable talent, set off on the appointed morning with high expectations.
We were not disappointed. Visitors were welcomed on their walk to the tower by the saxophone playing of the aptly named Steve Woods, a regular visitor to Calgary who had turned up by chance at the right time. After a short speech from Matthew Reade, local children Bea and Hamish Caskie officially opened the tower by dint of removing 2 large fern fronds from the entrance, and Gordon Buchanan said a few words of praise and encouragement, then everyone was free to explore the new addition to Calgary Art in Nature… more in the printed issue 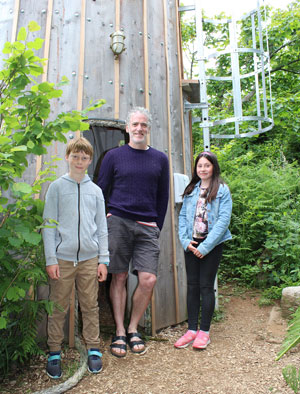